The following sections provide an overview of the most important functions for adding and connecting objects in the graphical editor.

Create Objects in the Graphical Editor#

To create objects in the graphical editor, you can do the following:

This scenario particularly applies to modelling objects. Repository objects can also be created directly in the Object Catalogue.

In order to create objects manually, proceed as follows: 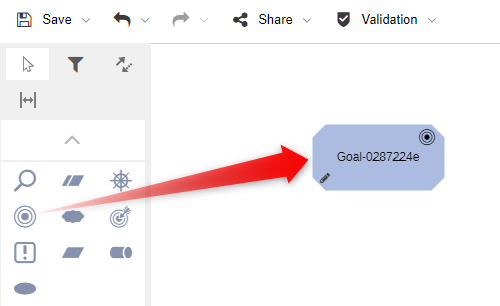 The Hover Modelling Assistant helps speed up the modelling process. Depending on the currently selected object, it suggests which objects should be added next. 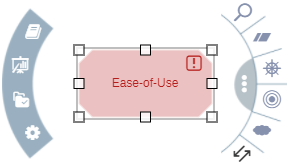 In order to use the modelling assistant:

If the modelling assistant does not appear, it may be disabled. For details on how to adapt your personal settings, please refer to the section Modelling.

Now do one of the following:

To draw a connector between two objects, choose one of the following options:

In order to draw a connector manually:

In order to draw a connector using the modelling assistant:

If the modelling assistant does not appear, it may be disabled. For details on how to adapt your personal settings, please refer to the section Modelling.

For every connector type only certain object types are defined where it may begin or end. When drawing a connector, ADOIT instantly checks whether and how the “from and to” objects can be connected. The following cases can occur:

By default, ADOIT draws straight connectors . If you prefer, you can make ADOIT draw right-angled connectors . For details on how to adapt your personal settings, please refer to the section Modelling .

Connector not Visible if One Object Contains the Other

Objects can be placed on top of each other so that one object contains the other. If such objects are linked with a connector, it is automatically hidden when you drop one object inside the other.

In the graphical editor, there are multiple ways to create relations by drag and drop. The following functions are available:

In order to re-use a single (repository) object from the Object Catalogue in the active model, proceed as follows:

If you re-use an object which contains relations to other objects in the active model, the corresponding connectors will be automatically drawn.

ADOIT distinguishes between repository objects and modelling objects. Repository objects are created and maintained in the Object Catalogue or in models. They can be reused in different models. Modelling objects, by contrast, are maintained only in the models in which they are created. They are not contained in the Object Catalogue.

Move Objects in the Graphical Editor#

You can move objects individually or collectively in the graphical editor:

Move Object to the Front or Back

Due to practical reasons, you cannot select container objects (e.g. a Swimlane) with a single click. You have two options: