This is documentation for ADONIS 14.0.
For the latest version, see the ADONIS 15.0 documentation.
Version: 14.0

In addition, all differences are listed in detail in a table. This table can be exported as an Excel file (XLSX format).

The attributes which should be considered when comparing models can be configured in the Administration Toolkit.

In order to compare models:

Additionally, you can directly compare a versioned model with its predecessor model:

The model comparison opens. The predecessor model is assigned as the base model.

Results of the Model Comparison​

The result of the comparison is displayed as follows: 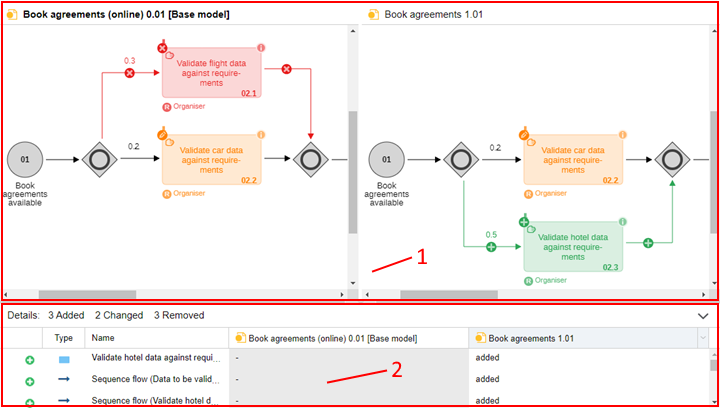 Differences between the models are highlighted as follows:

The results of the model comparison are displayed as follows in the table:

In order to switch the base model:

The menu bar is shared between both model windows. Some of the functions which can be accessed through the menu bar are specific to the active model.

The active model is the model which is currently being edited. It can be identified by its title which is displayed in bold. In order to switch the active model:

When you edit one of the models, the Refresh icon and the title of the model comparison become red. This indicates that the current view is outdated. In order to refresh the view:

There are different options to navigate through the results:

Scrolling and zooming is synchronised between the two model windows:

Connection between the comparison table and the model windows

The comparison table and the model windows are connected as follows:

In order to open the Notebook of an Object or Connector in the comparison table:

In order to export the comparison results as an Excel file (XLSX format):

In the Excel spreadsheet, removed, added and changed objects or connectors are shown.